The Four Drachma Postage Stamp Issued in celebration of the Centenary of Independence. It depicts the territories of Grecce in 1830, and those acquired since then to 1930. 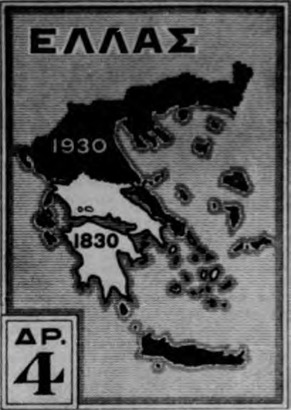 The year 1930 commemorates the Centenary of Greek Independence, for though it was in 1829 that the treaty of Adrianople was signed, it was not actually till February, 1830, that Turkey finally acknowledged it.

To the rest of the world, however, the Centenary of Greek Independence is actually more than the centenary of the liberty of an individual race, for the independence of Greece marks the culminating point of a movement against absolutism, which had spread throughout Europe. It was also in 1830 that Belgium obtained her freedom, and that Charles X of France was forced to cede his throne to democratic sovereignty.

The smoldering antagonism of the oppressed Greeks burst into the flame of open revolt with the raising of the flag of independence by Bishop Germanos on the 25th of March, 1821, and the heroic and epic struggle continued unabated until the chance battle of Navarino in 1827, not only enlisted the sympathy of the civilized world, but imbued the peoples of all nations with a fuller sense of the ideals of self-expression and self-determination.

In 1821 Greece had been under a foreign and oppressive yoke for nearly four centuries, a period of servitude long enough to leave its mark on any race; yet, whatever Turkish rule had done, it had not managed to suppress vitality. The building up of the new state was a very difficult task. The country was given a youthful and inexperienced monarch, whose Bavarian advisers were completely incapable of understanding that the traditions and idiosyncrasies of the Greeks could not be molded on the strict German pattern, and that in fact they had just emerged from a blood-thirsty struggle for self-expression and had no intention of changing one master for another. The contribution of the great powers was anything but helpful, and consisted solely in diplomatic intrigue for an ascendency of influence, in which Greece became a pawn in the game of economic exploitation.

The year 1930 is, however, not only the hundredth anniversary, but coincides with the beginning of a new era for the Greek people. In the last hundred years the territories of Greece have been more than doubled, her population has for the first time, been made a compact unit within her shores, and there is scarcely an irredentist problem. The arrangements for the interchange of populations with Turkey, and the influx of refugees from Asia Minor have added a population of a million and a half to Greece. This addition, representing over a quarter of her previous population, has now been almost completely absorbed, though, in the past few years, its support has been a severe strain. The refugees are now starting to form an element of economic utility to the country, but this has only been brought about after a gigantic effort in which the outside world has had its share. To understand properly the refugee question, it must be realized that this incursion of a million and a half souls was constituted almost entirely of women, children, and old men, a fact that can better be conceived when we take into account Lord Bryce's commission report of 1916. which computed that even then, since the beginning of the war, about a million Greeks had been exterminated in Asia Minor by the process of ‘'disappearing.’’

Greece can now look around her without envisaging any apparent cause of friction with her neighbors. The handshake of friendship offered by Kemal Pasha on behalf of the new Turkey, on the occasion of Independence Day, is an augury to good relationship with a country that had been the former traditional enemy.

The progress that has been achieved in the last hundred years is astonishing, and with internal reorganization and schemes for roads, irrigation, engineering, etc., duly proceeding apace, the path Is now dear for an era that should spell prosperity and peace, and in which Greece should prove an element of stability in the Near East to the general benefit of herself and the rest of Europe.

Professor Joseph McCabe is a distinguished English scholar, historian and philosopher. He has toured the United States on several occasions, delivering brilliant lectures on subjects of social progress.

Next Post History of the Greek Revolution by Harris J. Booras