Whenever one speaks revolutions there usually comes to the mind the needless bloodshed of modern political upheavals such as are prevalent during the recent years of economic stress. But not all revolutions of the past have been temporary spasms. There have been a few which stand out as landmarks in the progress of humanity toward the better. Some of the great changes have not been as dramatic as others, for not all have been limited to the political field, which is necessarily more spectacular, but have also taken place in the economic, social and aesthetic spheres. The three great modern political revolutions have been that of the American colonies in 1776, the upheaval of the French in 1792, and that of the Greek peoples who overthrew the fetters of an obnoxious imprisonment in 1821.

Of the latter many things have been said. A drama was enacted on the stage of rugged Peloponnesus and the isles of the Aegean which fired the imagination of all western peoples who claimed any culture at the time. In what was then the far off mysterious haze of the Near East an uprising of an ancient people echoed the great conflict of American freedom. It began with the raising of a banner by a prelate of the Church, and throughout the civilized world men lent a supporting hand whether by money, speeches, music, poetry or painting. Well known now are the deeds of patriots like the American Howe, or the Englishman Byron. Previously the great German Beethoven had composed his Ruins of Athens in protest, a significant gesture on the part of a modern genius toward the genius of antiquity.

But in France also a wave of gladness was blended with the defiance of Greece. Paris, the cultural center of the modern world, seethed with excitement, and it was not the emotional bravura which we are accustomed to confront in our days. The Parisians were rooting for the Greek cause as whole-heartedly as if their own kin were involved. Every setback which the little Greek band suffered was felt keenly, and every victory thriled all.

The proponent of the Hellenic cause in France was the great painter Eugene Delacroix. It is said that when a man successfully combats life he is called great, and to be great the man does that which is different. He does not follow the crowd. On the contrary the crowd follows him. Eugene Delacroix was such a man. He is preeminent as a painter who overthrew all stagnant and uninteresting tradition, and as a man who look great interest in the world about him. He did not bow slavishly to mediocrity, but with characteristic fearlessness he promulgated new ideas and adhered to them until they became universal in art. He literally revolutionized theories in painting. It, therefore, is no wonder that the HelIenic struggle appealed to such a character. Delacroix did not come by his enthusiasm through accident. He was one of the few who remembered what the French revolution had stood for and what it had sought to accomplish, for most Frenchmen had been distracted by the Napoleonic events. Thus the great master of form and color was fired with enthusiasm for the cause, and through him the entire French nation became vividly conscious of the struggle for freedom.

The contributions of Delacroix took the form of several paintings of revolutionary scenes, of Turks and Greeks fighting, stories all told in the painter’s inimitable vivid style of blazing color brushed forcefully on the canvas. The prosaic horse flashed blazing fire; the soldier’s sword has a very real edge to it as it is about to be swung. One can understand the feeling of war which is in the air. The people of France who had just struggled through the Napoleonic wars and were now exhausted to the point of being undisciplined were impatient with ordinary things. These paintings of the Greek scene caught the fancy of the French, aroused their enthusiasm and turned sentiment against the Turk definitely for the Greek. He presented the Greek cause in such a way as to make it unnatural in its greatness; not an ordinary war, but the holy struggle of the Crusades, the struggle of the Christian against the infidel. Delacroix depicted that and more.

He had already been interested in the Hellenic scene through studies in antique mythology. He painted, to pick at random, Apollo Conquering the Python. and the Education of Achilles; another was Orphee apportent aux Grecs les benefaits de la civilization. Those are great moments in the ancient history of Hellas. But the idyllic moments also appealed to the painter with his Leda and Bacchus. Medieval history in turn offered the quota to the Frenchman, for Delacroix had delved into studies of Byzantium and had made many sketches of the Byzantine emperors. The most famous painting of this period is the portrait of Justinian.

But it remained for the revolution of 1821 to offer scenes which appealed to the painter’s dramatic taste. He painted many canvases under the title Scene de la Guerre Hellenique. To describe one: we see two Greeks fighting, one riding a galloping horse while the other is firing a gun from a standing position, and all about them are strewn bodies of dead Turks. Another title used in several pictures was Combat du Giaour et du Pascha. One of the canvases shows a mounted Greek who has just struck down a Pasha from his horse, while another Turk lies on the ground contemplating death. In all these pictures one sees the fire which inspired the struggle against the oppressor. Delacroix did not mince words whenever he had something to say and that attitude is clearly legible in his painting. He wanted to show a great struggle of life and death and he showed it in its brutal harshness, though clothed with the appealing qualities of line and color.

The greatest masterpiece of all was "Le Massacre de Chios" (The Massacre of Chios), which was first exhibited in the Paris salon of 1824. This painting caused a sensation. It was a scene of a drama told in rhythm and splashes of color. One first sees a conglomeration of humans, half-naked Greeks, men and women. There is a dead mother with her children beside her. An old woman, with her mouth wide open and wondering eyes, gazes fixedly at the sky. Men in exhausted positions with facial expressions of utter abandonment. Turks are standing guard over the group, one of them on a galloping horse. In the distance is a burning town, with smoke rising over the destroyed homes. In the middle distance is a crowd in turmoil, a bedlammed mixture of bodies, guns and horses.

It is a most dramatic rendition, and has been called one of the most brilliant of political paintings.

Such is Delacroix and the effect which he had on the Greek cause. His attitude can be safely said to echo that of all the intellectuals of the period and showed that Greece was not forgotten but that she still lived on, eternal as the Phoenix. And the memory of Delacroix will also remain eternally in the minds of the Greeks for the love and affection which he showed toward their land. 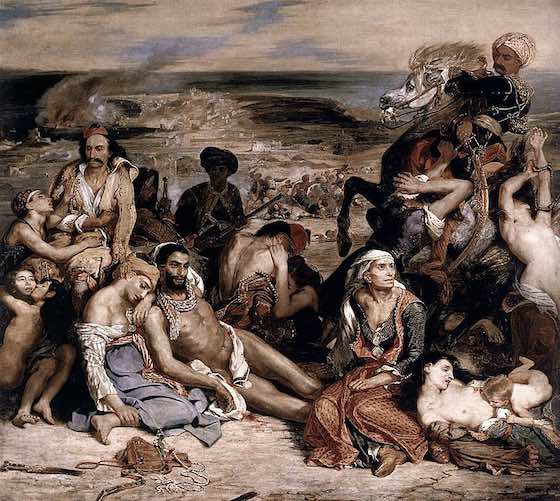 The island of Chios, because of its proximity to Asia Minor and Turkish domination, did not revolt during the first year of the War. In March of 1822, 2,500 from Samos island led by Lykourgos Logothetis landed on Chios and were attracting more and more inhabitants to join the Greek Revolution. The Sultan learned about it and heard rumors of a conspiracy of the inhabitants. This infuriated the Sultan. In April of 1822, the Sultan sent a Turkish fleet to destroy Chios and kill all the inhabitants. The Turkish fleet landed on Chios on Good Friday (April 13, 1822) and a punishing order of killing, rape, and plunder followed. For two weeks, the Turkish army killed and tortured people, burnt villages and set churches on fire.

The Turkish soldiers brutally massacred 25,000 men, women and children in cold blood. More than 47,000 of the population was sold into slavery in Alexandria, by the Turks, and only 2,000 persons remained alive on the island out of a growing and thriving population of 117,000. The island of Chios remained destitute and impoverished.

The Chios Massacre provoked international outrage and led to increasing support for the Greek cause worldwide. Famous artists dedicated works to this grief and the Westerns started to see the Greek Revolt in a more positive view. Eugene Delacroix, the famous French painter, got inspired a great painting from the Massacre of Chios depicting the horrors and atrocities of the Turks. Victor Hugo wrote a poem about it. Voluntary organizations collected money to support the Greek Revolution with arms and weapons, while many Westerners came to Greece to fight against the Ottomans. 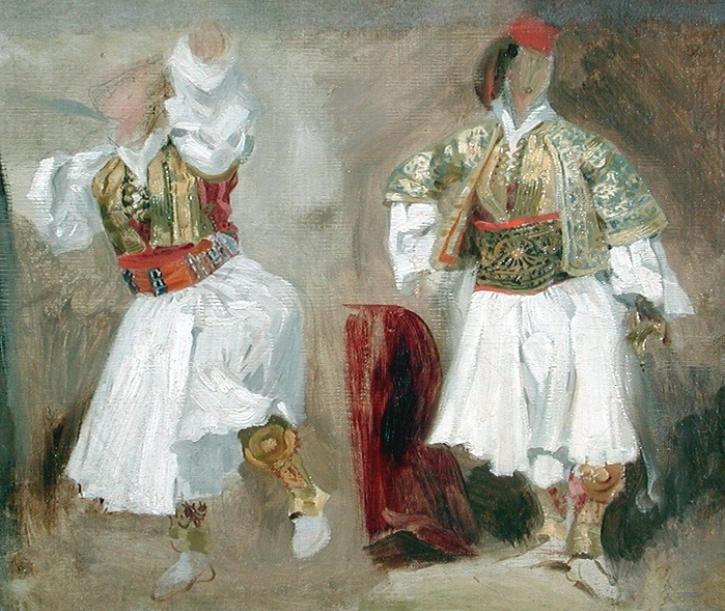 The Souliotes lived as a community in the area of Souli,in Epirus, known for their military prowess, their resistance to the local Ottoman ruler Ali Pasha, and their contribution to the Greek cause in the Greek War of Independence, under leaders such as Markos Botsaris and Kitsos Tzavelas.