The Greek Revolution and Lord Byron

In one of his lectures before the Lowell Institute, the late C. C. Felton, LLD., president of Harvard University said that the greatest sensation of the Greek Revolution was created by the advent of Lord Byon and his early death at Messolonghi:

He was misled by no enthusiasm of lettered and romantic youth; he knew thoroughly the condition of the Greeks, and no man had judged their faults of character with more severity. Blended with his poetical genius, there was in him a vein of practical good sense, which, in other circumstances, would have made him eminent in the business of public or private life. With this good sense he scrutinized the condition of Greece, and reasoned out the probability of his being able to render her a worthy service in that hour of her peril. He came to the conclusion, calmly, wtihout passion, without enthusiasm, without delusion, that there was a field in which he could achieve a good beyond the value of any poetical success; and having come to this conclusion, he forthwith consecrated his thoughts, his time, his fortune, his personal exertions, to the cause of Greece.

He set sail from Leghorn on the 24th of July 1823 and ten days after ward arrived in Cephalonia but did not embark for Messolonghi until the end of December, having employed the intervening time in corresponding with the friends of Greece, the Greek government, and the heads of the different parties, by whose dissensions the condition of the country was much endangered.

He arrived at Messolonghi on the 5th of January, 1824, having narrowly escaped being captured by the Turkish fleet. The whole population welcomed him on the shore; the ships fired salutes as he passed; and Mavrocordatos, at the head of the troops, and the civil authorities of the place, gave him a welcome as hearty as it was full of joy, and escorted him in a body to the house which had been prepared for him. His ample income was employed without stint and at the same time with excellent judgment, in the public service. It is an interesting incident in his literary life, that the last lines he wrote are those memorable ones, on the 22nd of January 1824, on completing his thirty-sixth year. The last stanza was sadly ominous of his approaching fate:

Up to battle! Sons of Suli
Up and do your duty duly!
There the wall -- and there the Moat is:
Bouwah! Bouwah! Suliotes!
There is booty -- there is Beauty,
Up my boys and do your duty.
By the sally and the rally
Which defied the arms of Ali;
By your own dear native Highlands.
By your children in the islands,
Up and charge, my Stratiotes,
Bouwah! -- Bouwah! -- Suliotes!
As our ploughshare is the Sabre:
Here's the harvest of our labour:
For behind those battered breaches
Are our foes with all their riches:
There is Glory -- there is plunder

WHAT are to me those honours or renown
Past or to come, a new-born people's cry?
Albeit for such I could despise a crown
Of aught save laurel, or for such could die.
I am a fool of passion, and a frown
Of thine to me is as an adder's eye
To the poor bird whose pinion fluttering down
Wafts unto death the breast it bore so high;
Such is this maddening fascination grown
So strong tin magic or so weak am I
Seek out less often sought than found
A soldier's grave, for thee the best;
Then look around, and choose thy ground
And take thy rest.

When Lord Byron first took sick on the 15th of February, he was urged to retire to some salubrious place, until his health should be restored. In reply to one of these friendly invitations he says 'I cannot quit Greece while there is a chance of my being of any, even supposed, utility; and while I can stand at all. I must stand by the cause.'

In the following month, from an exposure to a violent rain, he took the fever which, in a few days, ended his life. The details of that last illness and death till one of the saddest chapters in the history of Greece; and the affliction which fell on the country, as the news rapidly spread from province to province, testified how deeply his generous devotion to their cause had sunk into the hearts of the Greeks. In his last thoughts, indistinctly uttered in the broken words which were all the dissolving organs could shape, the names of his friends, his wife, his daughter, and of Greece, were confusedly mingled -- daughter and Greece were the very Iast words he spoke; and then silence and sleep of death settled over him who had electrified the world and whom, but now, the hopes of a nation centered. A storm of thunder broke over the town at the moment of his departure; and the Greeks, who thronged the streets to learn his condition, cried out. as the awful crash fell from the sky. The Great man is gone.

It was the festival of Easter, -- usually celebrated with great joy by the Greeks. But the day of festivity and rejoicing was turned into sorrow and mourning. All amusements ceased; the shops were shut; prayers were offered in all the churches. The funeral ceremony took place on the 22nd of April, in the church where lie the bodies of Marco Botzares and the brave General Normann. Thus fell Lord Byron on the soil of Greece, only four months after his arrival. His body was carried back to England and deposited in the burial place of his ancestors, near Newstead.

Mr. Spyrodon Trikoupis, the friend of Mavrocordatos and of Byron -- the able secretary, the vigorous historian, and now the worthy representative of his country in England -- delivered a funeral oration in the church on the Sunday after Easter.

'What an unlooked for event! What a deplorable misfortune!

But a short time has elapsed since the people of this deeply suffering country, welcomed with unfeigned joy and open arms this celebrated individual to their bosoms: today, overwhelmed with grief and despair they mourn over his funeral couch.'

The orator goes on to speak in the most feeling manner of the services Lord Byron had rendered; of the liberal employment of his wealth; of his excellent judgment: of his splendid Genius. He says:

'All lettered Europe has eulogized, and will eulogize, the poet of our age; and all ages will celebrate him, because he was born for all Europe and for all ages Greece! Greece! he said; and his voice expired. What Grecian heart is not broken when it recalls this scene?

'Thine arms. O deadly cherished daughters will receive him; thy tears will flow on the tomb which holds his body; and the tears of the orphans of Greece shall be shed over the urn that bolds his most precious heart, and upon the whole land of Hellas, because the whole land of Hellas shall be his sepulchre. A thousand Christian voices are at this moment raised, and the temple of the Most High resounds with funeral chants, and is filled with prayers, that his revered remains may he safely restored to his native land and that his soul may rest where rest the righteous forever' 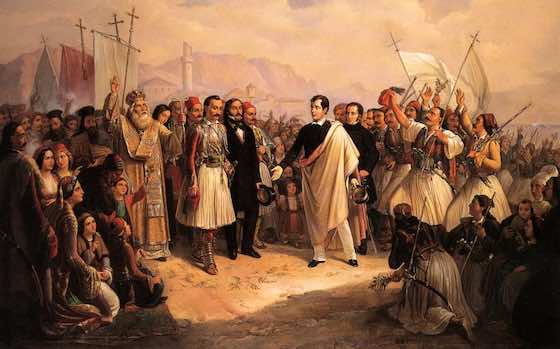 The Reception of Lord Byron at Missolonghi

Lord Byron arrived at Missolonghi on Deeember 24, 1823, where he was warmly welcomed by the Hellenes. He delighted in wearing the Greek foustanella. With his own money, he supported 500 Souliotes soldiers, and gave greatly of his own wealth for the cause of Greece. However, illness struck on April 6, 1824, and on April 7, 1824, he died, at 37 years of age, with these words on his lips:

"Greece, I gave you everything that any one man can give. I gave you my wealth — my every hour — my health, and now — my very life. My sacrifice is for your salvation." 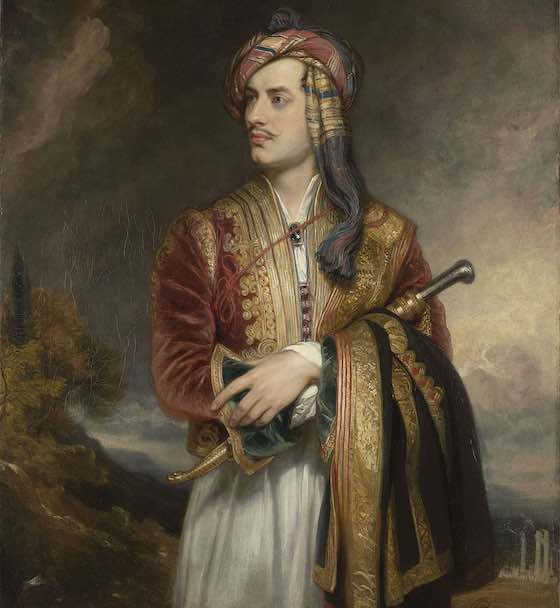 Next Post An Interview with Socrates & Plato by Nicholas J. Cassavetes