Alexander George Paspatis – the son of George Philip and Mary (Schillizzi) Paspatis – was born on the island of Chios in May, 1814. Paspatis arrived at the Port of Boston on May 17, 1824 on board the brig Cypress, commanded by Captain Chaddock, along with the Ralli brothers and Nicholas Petrokokinos. Paspatis was educated in the United States at the Mount Pleasant Institute (Amherst) and graduated from Amherst College in 1831. He pursued medical studies at the Universities of Paris and Padua Medical School, receiving his M.D. degree from Padua in 1834. Dr. Paspatis also received an M.A. from Amherst College in 1835.

He returned to Athens and then Constantinople. He became one of the most prominent doctors of his era. He practised medicine in Constantinople from 1840 to 1879. For twenty years, he was Physician in Chief at Constantinople's great Greek hospital, Epta Pirgon. On April 18, 1852 he married Argyro N. Vouros. In 1879, he retired and moved back to Athens. Subsequently Amherst College conferred upon him the LL.D. degree in 1886.

Dr. Alexander George Paspatis, a student of Byzantium and antiquities, was considered the chief Greek archeologist as well as the top Byzantine scholar of his time. Paspatis was fluent in 15 languages, and interpreted the Greek used in the New Testament.

Dr. Alexander George Paspatis passed away on December 24, 1891 from acute pneumonia at the age of 77.

For the dedication his book >Constantinople published in 1895, Professor Edwin A. Grosvenor fellow graduate of Amherst, student, and close friend wrote "Alexander G. Paspatis, graduate and doctor of laws of my own Alma Mater, my teacher and early friend, the most modest, the most patient, the most learned of all those who have striven to probe the mysteries of the classic and the Byzantine city."

Thomas Burgess gives the following biography of Alexander George Paspatis in his book "Greeks in America":

After the fiendish massacre of the population by the Turks in 1822, which reduced the population of Chios from 150,000 to 15,000 souls, [Paspatis was taken] with the other captives to Smyrna and exposed in the Turkish slave market for sale. There his own mother, who had miraculously escaped and had wandered alone up and down the coast of Asia Minor, saw him and bought him for the only two pieces of money she had managed to save. Charitable Americans embarked him on a ship and for two years he found a kind home in the family of Marshall P. Wilder of Boston.

He attended the Mt. Pleasant Preparatory School and in 1831 graduated from Amherst. Never has Amherst had a worthier graduate. He returned to Europe, took an extended course in medicine at Paris and Pisa, and for years was one of the most distinguished practitioners in Constantinople. Retiring from practice in 1879 he lived in Athens until his death in 1891. 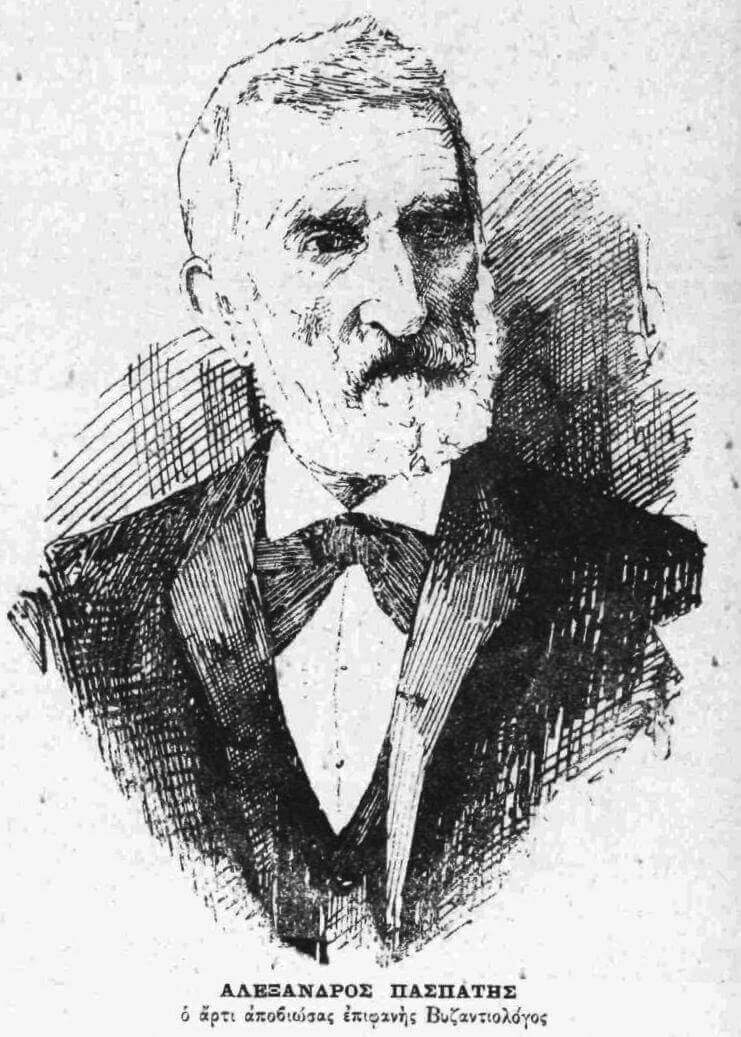 Record of Graduates of Amherst College

The "Record of Graduates of Amherst College" states the following regarding Alexander George Paspatis:

… Much as he had grown to love America, he was homesick for his mother and his own people; he longed to be of service to both. So he returned to Europen and entered upon an extended course in medicine at the universities of Paris and Pisa. He took his degree from the latter institution in 1839. … In 1840 he established himself in Constantinople where for 38 years he exercised his profession, being recognized as one of the most able and successful [medical] practioners ….

… A profound and accurate student, he was an almost unrivalled authority on Byzantine history and archaeology and an eminent glossologist. Master of sixteen languages, his literary productions were most given to the world in English, French and Greek. He, with five other scholars, planted in 1861 the Philologikos Ellinikos Syllogos, a society which is now reckoning its members by the thousands and has planted nearly two hundred schools in the Ottoman Empire and by its literary contributions has acquired a worldwide fame. He was always a devoted member of the Eastern Orthodox Church, and believed that whatever was imperfect therein could be reformed or remedied from within and not from without.

[Dr. Alexander George Paspatis'] modesty and self-distrust equalled his learning. He shrank from the recognition of his own deeds. … Filial devotion was part of his character. … Tolerant of all faiths and in sympathy with the principles animating every christian effort to do good, he believed that whatever was imperfect in the Eastern Greek Orthodox church could be reformed or remedied from within and not from without; and hence he always continued a devoted member of that ancient communion wherein he was born. … It is not inappropriate to say that no more truly distinguished, no worthier graduate has ever been honored with the diploma of Amherst College.