George Ipsara Sirian was born December 15, 1818 on the Greek island of Psara. In 1824, during the Greek War of Independence, he witnessed the slaughter of his native Greek countrymen at the hands of Ottoman Turks. George Sirian was set adrift at sea in a boat by his mother to escape a band of roving Turks on the Greek island during the Greek Revolutionary War. An American ship cruising in the waters picked up the young boy, and he remained with the ship's crew, and was brought to America. He entered the United States Navy and became a warrant officer, and gunner.

In May of 1827, George Sirian joined the crew of the USS Constitution. He served aboard the USS Constitution, first with the rank of boy and then ordinary seaman, until the ship reached Boston Harbor on July 4, 1828. While on the Constitution, Sirian was aided by Lieutenant Robert Randolph, who took the young refugee under his wing and sponsored his education. 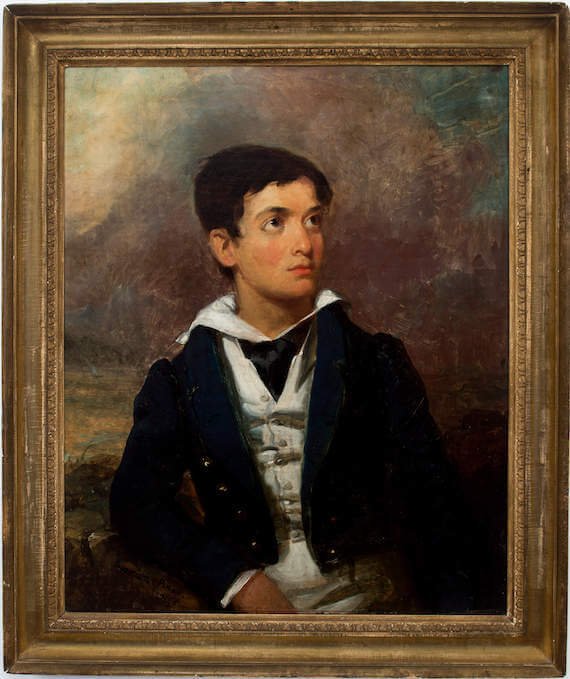 Portrait of George Sirian at Age 10

Sirian later was taken by Randolph to Gunner George Marshall, a fellow Greek from Rhodes who, in 1822, wrote the first practical military gunnery manual for the United States Navy. Marshall instructed Sirian in naval gunnery. On April 20, 1837, Sirian was appointed as gunner. In 1840, George Sirian married Eleanor Marshall, the daughter of George Marshall.

During his naval career, Sirian served in 37 successive tours on 20 different ships and seven shore stations, including on USS Constitution's World Cruise, as a gunnery instructor at the Naval Academy during the American Civil War, and in Japan and Hong Kong. Sirian is the only sailor to serve on Constitution on three separate tours of duty.

George Sirian remained in the United States Navy for 53 years until he retired in 1880, after one of the longest active duty service careers in United States Naval history. He died in Portsmouth, Virginia, on December 21, 1891.

The George Sirian Meritorious Service Award is named in his honor. The award is given anually aboard the USS Constitution to an outstanding Chief Petty Officer selected from the worldwide fleet.

The oldest gunner in the United States Navy, the venerable George Sirian, died the other day in Portsmouth, Virginia. His life was full, of romance and adventures. Born in 1817, on the Greek isle of Psara, he was made a homeless orphan by the attack and massacre by the Turks of the inhabitants of that island in 1824. The bombardment of the Turks by the USS Constitution "Old Ironsides" saved the lives of a large number, and he was among eleven boys who survived aud were brought away by that gallant old vessel.

He was brought home by Lieutenant Randolph, of Richmond, the executive officer of the ship. Later he was taken by Mr. George Marshall, gunner in the United States Navy, from Lieutenant Randolph and by him tatiirht gunnery and pyrotechnics. At the age of twenty he entered the Navy as a gunner, and in many a hard fought battle afterward showed that the blood of the Greeks, famous at Marathon and Thermopylae, at Platea and Mycenae still lived in his veins.