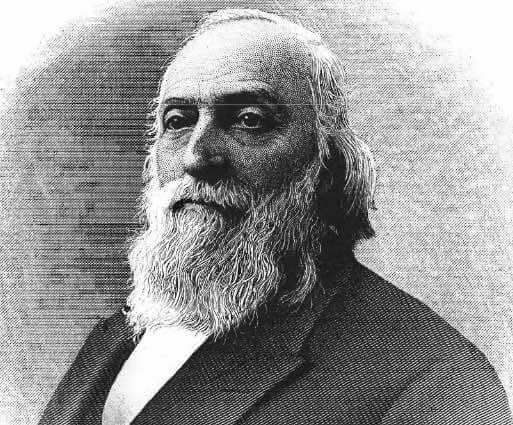 John Celivergos Zachos achieved great success as teacher, lecturer, and writer. He devoted most of his life to the cause of education and developed a new method for teaching adults and the illiterate. (Source: Greeks in America).

"Fate decreed that the long life of John C. Zachos should be spent in many places. The Greek Revolution of 1821 made him first a refugee from his birthplace, and soon after an orphan; and then while still a young schoolboy learning the letters of his ancient, native tongue, an exile from Greece. In the new trans-Atlantic republic Zachos attended four schools in three different states. A teacher for more than half a century, he taught in the schools of Ohio, South Carolina, Pennsylvania, New York, and Massachusetts, if the pulpit be another form of the teacher's desk. In the course of his long academic career Zachos was the valued associate of several great pioneers in American education and he participated in three noble, bold experiments in democratic education"

John (Ioannis) Celivergos Zachos (December 20, 1820 – March 20, 1898) was born in Constantinople, the son of Nicholas Zachos, a prosperous merchant and Euphrosyne. His father, an officer in the Greek army during the Greek war of independence, was killed in battle in 1825. His mother, a well-educated woman who subsequently married Nicholas Celivergos, sought better educational opportunities.

John Zachos was brought to America from Greece by Dr. Samuel Gridley Howe, at the close of the Greek War of Independence, and became one of America's outstanding educators and teachers. Zachos went on to graduate from Kenyon College (Ohio), become editor of the Ohio Journal of Education and principal of the Grammar School at Antioch College. He was an associate of Horace Mann. Zachos was ordained a Unitarian minister and was a professor at the Meadville Theological School (Pennsylvania). He went on to become an educator and the curator at Cooper Union in New York.

He married Harriet Tompkins Canfield Zachos on July 26, 1849. They had 6 children born between 1850 to 1865. Their daughter Mary Helena Zachos, following in the footsteps of her father, also became an elocutionist and a professor. Helena Zachos taught English, oratory, debate, parliamentary procedure, and elocution classes at Cooper Union beginning in 1897.

The following biographical sketch is taken from Thomas Burgess' "The Greeks in America" (1912):

"Professor John (Ioannis) Celivergos Zachos, M.D., late curator of the Cooper Union, New York, was born in Constantinople, 1820. His father was one of the "merchant princes" of the city, and an interpreter of the Sultan's Court, ranking in the diplomatic corps of the Turkish government. His mother was a woman of superior education and connected with the best Phanariote families, as the Mavrocordato and the lpsilanti. Mr. Zachos, the father, was one of the first Hetairists (the Greek secret societies conspiring for freedom), and at the opening of the War of Independence was betrayed and condemned to be beheaded, but by a large bribe managed to escape with his family. He fled to the north of Greece, where he devoted his fortune and life to the holy cause. He fell in an early battle among the mountains of Thessaly, where his little command was resisting a whole army of Turks. Thus were left his wife and the boy Joannes, three years old, and a baby girl. It was the indomitable spirit of the mother that brought the family and a large number of relatives and dependents safely through the years of war, in a country harried by a bloody enemy and a lawless soldiery of her own race. She always carried arms and trained her retainers and encouraged them in the fight. When dangers pressed too heavily on the mainland, she bought a vessel and sought safety among the islands and inlets of the Aegean.

"So passed the boy's life until he was ten years old. Soon after the end of the war his mother married again, Nikolaos Kiliverges, secretary to President Capodistria. Dr. Samuel Gridley Howe, being brought into contact, in his business of mercy, with the stepfather, advised the Kyria Zachos to send her boy to America to be educated, and promised to take care of him. Thus, Howe himself brought the boy to America. For three years the mother paid all the expenses, until the extravagant court life of her husband, who became royal treasurer of King Otho, squandered her fortune. For the nexl lwo years his American friends paid young Zachos' expenses, and then at the age of 15 he took upon himself the problem of self-support and education, at first, as a printer's boy, then al the Manual Labor College in Bristol, Pennasylvania, and then al Kenyon College, where he graduated in 1840. For three years and a half he studied medicine at Miami, Ohio, at which time he was one of the founders of the Beta Theta Pi fraternity.

"He did not, however, practice his profession, but took up teaching, becoming co-principal of a Young Ladies Academy in Ohio. In 1849 he married Miss Harriet Canfield. They had six children. In 1853, he was invited by Horace Mann to a professorship in Antioch College, Yellow Springs, Ohio. During the Civil War he offered himself for the service of the "Educational Commission of Boston and New York" organized to send men and women to care for and educate the "free men of the South." Next, Dr. Zachos was appointed acting surgeon in the U.S. Army and assigned to the multifarious duties of superintendency and command of Paris Island, with a population of 600 negroes, left by their former masters in greatest destitution. After two years of this work he broke down. He next was installed in the Unitarian pulpit al West Newton, Mass. In 1866 he was appointed professor of Rhetoric in the Meadville Theological School in Pennsylvania.

"Finally, in 1871, at the call of his intimate friend, Peter Cooper, he became curator of the Cooper Union in New York. Here Dr. Zachos passed the last 27 years of his life and found his greatest field of labor and influence. His talent as a lecturer on the public platform and in the classroom was of marked value to this great institution, and he remained its literary head to the day of his death. One of the most interesting sides of this versatile, scholarly, brilliant, big hearted Greek was his close association with the literary men of New York: Bayard Taylor, William Cullen Bryant, Charles Dana, and many others."

In 1864, John Zachos published his "Phonic Primer and Reader" -- a book intended for the sole use of the working classes attending night school, and for self-study. He also "worked with the negro,"" offering ways to read and write, for those who were illiterate. He achieved national recognition in this field, before and after the Civil War. Other books of John Zachos are "The New American Speaker" and "Analytic Elocution," and he also wrote books on the life of his friend, Peter Cooper, industrialist and founder of Cooper Union in New York.

John Celivergos Zachos, who was for twenty-seven years curator of Cooper Union, and among whose pupils were some of the most prominent men in business and professional life in this city, died yesterday at his home, No. 113 West Eighty-fourth Street, of heart failure.

Dr. Zachos was best known as an educator of young persons, and had many friends in New York city, especially among the younger men who attended his classes In Cooper Union and remembered him always afterward. He was very fond of young men, calling them "his boys." and today there are in this city ninny who have already achieved success who can look back to the days in Cooper Union when Dr. Zachos was their friend and instructor. Recorder John W. Goff was one of Dr. Zachos' favorite "boys." Peter Cooper was a close personal friend.

Dr. Zachos was born in Constantinople, on December 20, 1820. He was of Greek parentage and came to this country when he was ten years old with Dr. Samuel G. Howe, of Boston, to be educated. He studied in Amherst for a time, but was graduated from Kenyon College, Ohio, in 1840, and in 1842-5 studied at the Medical School of Miami University, but did not take his degree. He was associate principal in Cooper Female Seminary, Dayton, Ohio, 1851-4 and later became the head of the grammar school of Antioch College.

During the civil war he served in the Union Army as assistant surgeon, and in 1865, having studied theology privately, he was ordained pastor of the Unitarian church in West Newton, Mass. In 1866-7 he was pastor in Meadville, Pennsylvania, and professor of rhetoric in the theological school at that place. He had been the curator of Cooper Union since 1871.