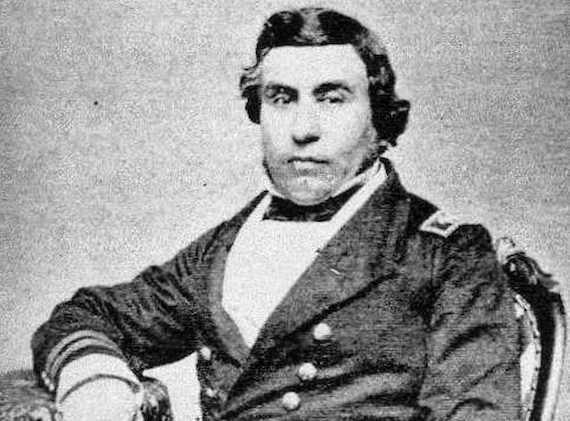 Captain George Musalas Colvocoresses, United States Navy (1816 - 1872), son of Constantine and Franka (Grirualdi) Colvocoresses, was born born on October 22, 1816 on the Greek island of Chios. During the Greek War of Independence the Turks invaded Chios in 1822, and after narrowly escaping the massacre that followed, George with his mother and two young sisters were carried captives to Smyrna. Through friends in Smyrna he was ransomed and sent with other Greek orphans in 1826 on board the American brig Margarita to Baltimore. The misfortunes and tragedy that George experienced caught the attention and empathy of Captain Alden Partridge of Vermont, head of the Norwich Military Academy, who adopted the young Colvocoresses as his son.

On February 21, 1832 at the age of sixteen – and upon completion of his education at Norwich Military Academy – George was appointed a midshipman into the United States Naval Academy in Annapolis. He had a distinguished career in the U.S. Navy.

His first appointment (1836 to 1837) was the frigate United States. On June 23, 1838, he was then assigned to Captain Wilkes' Exploring Expedition of the Antarctic Ocean and the Pacific Northwest (In 1852, then Lieutenant George Musalas Colvocoresses' book "Four Years In The Government Exploring Expedition" about the Wilkes Expedition was published. During the expedition, Captain Wilkes named Colvos Passage to honor midshipman George Musalas Colvocoresses).

In 1843, he was commissioned a lieutenant. George Musalas Colvocoresses served in the Pacific squadron (1844 to 1846); the Mediterranean squadron (1847 to 1849); the African coast (1851 to 1852); New York (1853 to 1855); East India squadron (1855 to 1858); Portsmouth Navy Yard 1858 to 1860. During the Civil War he commanded both the USS Supply and USS Saratoga. Captain George Musalas Colvocoresses was cited for his service multiple times by the Secretary of the Navy. On April 4, 1867, he was commissioned captain and placed on the retired list. He lived the last years of his life in Litchfield, Connecticut. He was assassinated in Bridgeport, Connecticutt on June 3, 1872, while on his way to New York.

The following biographical sketch is taken from Thomas Burgess' book, "The Greeks in America" (1912):

"Captain George Musalas Colvocoresses, U.S.N., was another survivor of the massacre of Chios. His father, escaping to the Austrian consulate, was able to ransom his family, though George saw his uncle killed and his aged grandmother beaten to death before he reached safety. He, only six years old, with nine other Chiote boys was placed on board an American brig bound for Baltimore On the voyage he was cared for and taught English by the mate of the brig. On his arrival he appears to have made an especially good impression upon the committee of influential gentlemen who interested themselves in these boys, and General Harper procured from President Monroe the promise of a cadetship at West Point for the little lad. Attracted by the accounts in the newspapers, Captain Alder Partridge, head of a military academy in Norwich, Vermont, took the boy and educated and provided for him. Later he entered the Navy, where he served the rest of his life with honor.

He sailed in various important naval expeditions all over the world, and in the Civil War commanded the U.S.S. Supply and later the U.S.S. Saratoga, when he won the repeated thanks of Admiral Dahlgren in general orders and the commendation of the Secretary of the Navy for his "zeal and good service to the country." In 1865 he was retired with the rank of Captain and lived till his death in 1872 with his family in Litchfield, Connecticut.

Among the papers of the late Capt G. M. Colvocoresses, U. S. N. there Is an account of the circumstances under which he came to the United States and his later connection with Norwich University, Northfield then located at Norwich.

He was born in the Island ot Chios, Grecian Archipelago, and was seven years old when the Turkish fleet appeared off that island in 1882 and in executing the vengeance of the sultan committed what Mr. Gladstone characterized as "that unparalleled atrocity of modern times," the massacre of Chios.

By this barbarity a peaceful and industrious population was driven from home, some 60,000 men and women and children put to the sword or carried to the slave market of Asia Minor to suffer a worse fate than death.

Many of young Colvocoresses' relatives were slain and others scattered. He, with his mother and two sisters, was captured in their flight. His father escaped and subsequently ransomed the surviving members of his family through friends at the Austrian consulate.

After this ransom George was placed with nine Greek boys on board the American brig Margareta to seek an asylum in the United States whose people manifested great sympathy for the struggling Greeks. The notice of the arrival of the boys published in the Baltimore American attracted the attention of Capt. Alden Partridge, of the United States Army, superintendent of the military academy at Norwich.

Capt. Partridge who was no less distinguished for his benevolence than for his ability as an educator, wrote the postmaster at Baltimore stating his interest In the story of young George and that he would gladly care for and educate him as a son.

The Greek relief committee that had the boys in charge accepted the offer and sent the boy to Norwich where he remained until he was 16. Then a warrant was procured for him as midshipman in the United States Navy in which he rose to the rank of captain. His son, George Partridge Colvocoresses, went to sea with his father for two years during the Civil War, subsequently entered the United States Naval Academy and after serving actively 45 years was retired as a rear admiral.