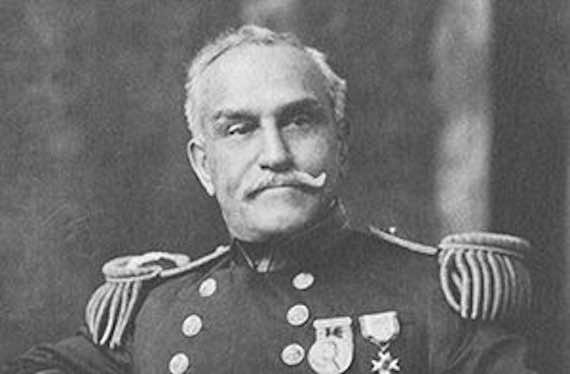 While a cadet at Norwich University (Class of 1866), he left that institution at the close of his freshman year and served in the United States Navy as a captain's to his father on board the U.S.S. Supply and U.S.S. Saratoga. Subsequently, he entered the United States Naval Academy in 1864, and graduated in 1869. In the Spanish War he was executive officer of the U.S.S. Concord at the battle of Manila Bay. Serving under Admiral Dewey, he took part in all the Phillipine naval battles under Admiral Dewey. Admiral Dewey appointed him executive officer of his flagship, and it was he who commanded the Olympia's battalion in the several ovations that welcomed the hero in New York, Washington, and Boston. 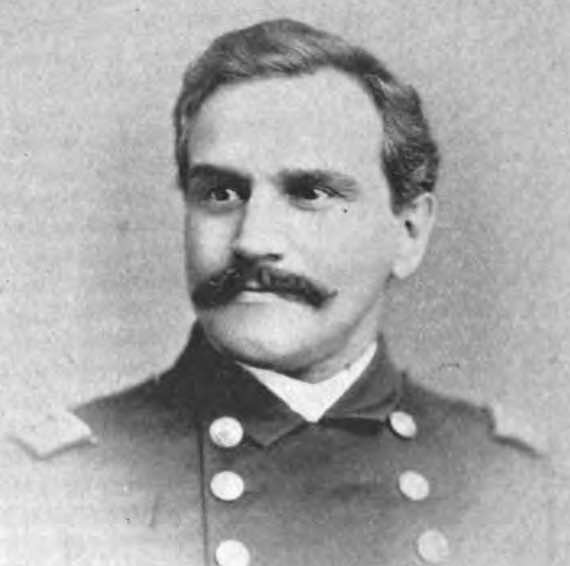 During various tours of shore duty, he was employed at the Hydrographic Office, Naval War Records Office, War College, Torpedo School and Naval Academy; at the Naval Academy, he was for eight years an instructor. He commanded the Naval Station at Key West, the cruisers, Lancaster, Yankee, and Newark and the Naval Academy Practice Squadron in the summer cruise of 1906.

George Partridge Colvocoresses was promoted to Ensign 1870, Master 1872, Lieutenant 1875, Lieutenant-Commander 1897, Commander 1900, Captain 1905. Admiral Colvocoresses' last active service was as commandant of Midshipmen of the United States Naval Academy in Annapolis in the years 1906-07. After 45 years of active service he retired with the rank of Rear Admiral.

George Partridge Colvocoresses was awarded the Dewey Medal, Civil War Campaign Medal, Spanish Campaign Medal, and the Philippine Campaign Medal. He was a member of the Military Order of the Loyal Legion of the United States; and Society of Manila Bay Fraternity. He was alos presented with a sword of honor by his fellow citizens of Litchfield, Connecticut.

Rear Admiral George P. Colvocoresses, United States Navy, retired, who saw service in the Civil War and who participated in the battle of Manila Bay as an officer in Admiral Dewey's squadron, died suddenly last night at his home here at the age of 85.

… When the news of the battle of Manila Bay reached the United States in May, 1898, the country rang with praises for Commodore, later Admiral, George Dewey, a native of Vermont. As the details of the naval operations in Philippine waters in the war with Spain became known due honors were paid to George Partridge Colvocoresses, then a lieutenant commander who also was a native of Vermont.

Colvocoresses shared with Dewey in the ovations at Washington, New York and Boston. Upon Dewey's recommendation he was advanced five numbers in grade, "for eminent and conspicuous conduct in battle." On November 10, 1899, his home town of Litchfield declared a "Colvocoresses Day," gave him an elaborate reception and gave him a sword of honor.

He was the son of Captain George M. Colvocoresses, United States Navy, who came to America during the Greek revolution of 1822 and was cared for and educated by Captain Alden Partridge, at one time superintendent of the West Point military academy and the founder of Norwich University.

Rear Admiral Colvocoresses was born at Norwich, Vermont, on April 3, 1847. He accompanied his father as captain's clerk on naval vessels during the first two years of the Civil War. After studying at Norwich University as a member of the class of 186S and at the South Berkshire Institute, New Marlboro. Massachusetts, he was graduated from the Naval Academy in 1869, receiving his diploma from General Grant.

At the start of the war with Spain he was executive officer of the U. S. S. "Concord." In 1900 he was promoted to commander and, in 1905 to captain. His later activities included the preparation for publication of the records of the Union and Confederate navies in the Civil War, commandant of the Key West naval station and two years as commandant at the Naval Academy. At his own request he was retired in 1907 with the rank of rear admiral. Norwich University awarded him the honorary degree of Master of Arts in 1897.

He was married to Mary D. Baldwin of New York in 1875 and they made their home at Litchfield. He was a member of the Army and Navy Club, the Manila Bay Society and the Litchfield County University Club. He was the holder of the Civil War Service Medal and the Manila Bay and Spanish War and Manila Campaign Service medals. 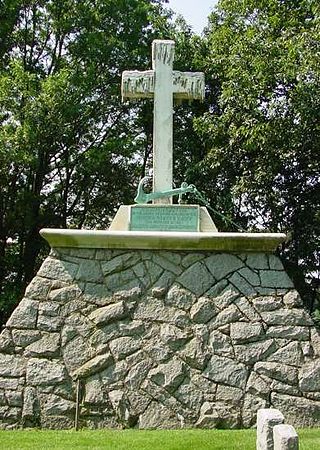 The Jeannette Monument is the largest monument in the United States Naval Academy Cemetery. It memorializes the 1881 loss of USS Jeannette while exploring the Arctic ice. The USS Jeannette, with a crew of 33, collapsed and sank under surging ice in the summer of 1881. It was designed by George Partridge Colvocoresses, then drawing instructor at the Naval Academy. Colvocoresses' design has caked ice draped on the cross, and an antique anchor at the cross's base. The monument is situated near the cemetery's shore with Dorsey Creek, and near the mouth of the creek into the Severn River.